The board of speakers was composed of Tom Norrington-Davies, Carolyn Cowan, Hannah Whittingham and Dr Melody Moore. I found the choice of speakers really smart as you could sense they all had different personalities and approaches to this topic, which I guess highlighted the complexity of this issue, and the various ways you can work on it. I’m not going to write an exhaustive summary of what’s been discussed in this podcast, but I wanted to share with you some of the highlights, the parts that particularly resonated with me. Some of the quotes that made me pause and reflect.

Tom was talking about the pathologising of food and the notion of orthorexia, which is the state of being obsessed with what’s good or not good for you. Junk food is being shamed and more and more brands advertise on how their products contribute to healthy eating. But if one can eat clean it means that one can also eat dirty.

Promoting clean eating as the right way of eating, comes down to putting a wrong label on some food or food groups. Then it becomes sinful to indulge in those shameful food groups. Tom also reminded us that being a cook doesn’t equal being a nutritionist. Sounds like stating the obvious but since the internet now offers a platform for everyone to speak up, all it takes is good communication skills to be heard. It doesn’t mean that everyone talking about nutrition is qualified and properly informed. On top of that, many food companies are surfing on the healthy eating trend using ads and messages about healthy eating and “food which is good for you”. This is advertising, not information. But as soon as this idea of what’s clean is planted in our mind, it automatically creates its nemesis: the dirty, wrong, sinful, you-should-be-ashamed-of-eating food.

I completely relate to this: when I was at the peak of my eating disorders, I identified - with the help of my therapist - that some food would trigger crises whereas some others would help stopping them. Eating an apple for instance would calm me down and reassure me. The problem with this is that I wasn’t eating an apple because I was hungry or craving an apple, I was eating it because I was utterly anxious and I needed to control my anxiety. As my mind had associated that fruit with a good label, it somehow had the power of calming me down. The opposite was also true: some food would automatically stress me out and start the downward spiral toward a violent binge crisis. Strangely, sometimes food considered as healthy would trigger my anxiety too. Proving that it’s nothing related to the food itself, but just the perception my mind had of it. At no point in this whole relationship with food, hunger or pleasure were involved. When you think about it, this is such a broken way of thinking about food.

During my yoga teacher training we covered a chapter about Gunas. Sudhir took us through the three states, how to move from one to the other and why it’s important to actually find balance within these three states. He made clear that there’s no problem with tamas as long as we’re working toward this balancing act. That’s the greatest learning I took away from practicing yoga - working towards balance calms me down and makes me happier, whether it’s in the way I approach, react to things, or eat.

"Addiction is a mechanism to keep ourselves safe" - Carolyn Cowan

I remember when I first called my "issue" an addiction - it was 2 years after my anorexia started and shortly after bulimia took over. When I shared this perspective with people around me who had no clue what anorexia and bulimia were (the kind of people who'd joke saying they wished they could 'catch' anorexia in order to lose a few pounds for instance) they didn't believe this disorder could qualify as such. However, the same way you can be addicted to alcohol or drugs because it somehow helps you stay away from a feeling you can't cope with, anorexia and bulimia are habits you fall into that 'help' you deal with stress by giving you the impression of control. It's a defense mechanism for when your mind can't cope.

I surprisingly managed to understand this quite early in the process but I failed to see the positive side it: if eating disorders aren't a decease, something physically failing you like an organ failure or cancer, it means that it's not something you are and therefore can't change. It's a mechanism you got caught in for various reasons. So you can get out of it. I wished I had realised it at the time.

Breaking habits require constant attention though. The first time my therapist told me that she'd help me live with my disorder I hated what I heard. I didn't want to live with it, I wanted to forget all about it and get rid of it. I had never seen a therapist nor did I ever imagine I would. I first thought she would ask me questions about my childhood until something clicked and my eating disorder would disappear magically, in a very dramatic black and white flashback with some loud and repetitive background music involving a ridiculous amount of violins.

Well, that's not exactly how it works - or at least not for me. Surely I now understand way better how and why I put these specific defense mechanisms in place and it's obviously related to people and events from my past, but the mechanisms themselves are first and foremost habits my mind created. An escape route, and emergency path. And the best way not to have to take that path was to avoid putting myself in situations where I would feel so unsafe and stressed out that my mind would switch to survival mode.

After a short period of denial then anger, I realised that not putting myself in stressful situations was, in fact, a very good thing on many levels. Having a routine helps you appreciate more the adventure. And learning how to say no is the most empowering thing I've ever learned; unlike what people who knew me at the time could think, this is when I truly became confident. I put myself first, and I started to break the cycle.

“Perfectionism is the mask of shame” - Carolyn Cowan

Perfectionism is a weird one. When in interviews you’re asked about your main qualities and defaults, perfectionism is always the joker card you can pull as that one never really fits in any of the two categories. Who can blame you for doing things perfectly? At the same time what’s the cost of never being satisfied? When Carolyn mentioned that there’s shame hiding behind that quest for perfection my first reaction was to think that it’s just a way for lazy people to push back on doing things properly. Then I paused and reflect; being a perfectionist means never being fully satisfied. What’s pushing perfectionists to always chase perfection knowing they’ll remain eternally unsatisfied? Why are they never content with the way they do things? Why do they always want to push further? Personally it’s because I don’t want to be perceived as being lazy. Because for me, being lazy is shameful. Here we go.

I’m not saying that it's wrong to try and get better at things, but it's definitely not good not being able to acknowledge progress and being content with it. As if doing this would prevent us from getting better, and as if not wanting to get better would make us less awesome than we already are. This became very clear to me a few months ago during a vinyasa class I attended, when the teacher was offering options to suit every ‘levels’ of practitioners. As always, she insisted on the fact what we didn’t have to take any of the options and we should only push as far as our body needed. And as always I picked the ‘hardest’ one without thinking twice. Then she challenged us and asked why did we pick the option we picked. Why, if we tend to always pick the most challenging option, we always do so. What was pushing us.

The problem with never being content with ourselves is, again, how it affects our perception. The feeling of not being enough that drags along insidiously and can affect self confidence. “I’m a perfectionist because otherwise I feel like shit and I blame myself for not being enough. Nobody can blame me if I always do things perfectly.”. Yep, definitely the mask of shame. Since I started practicing yoga, my mindset has shifted a lot. I swapped my quest for perfection against a quest for balance. And believe it or not, it’s actually harder. I often need reminders. I have to pause and reflect before rushing into things spontaneously. Ask myself why, if it’s my body asking for it, or my mind overriding it. 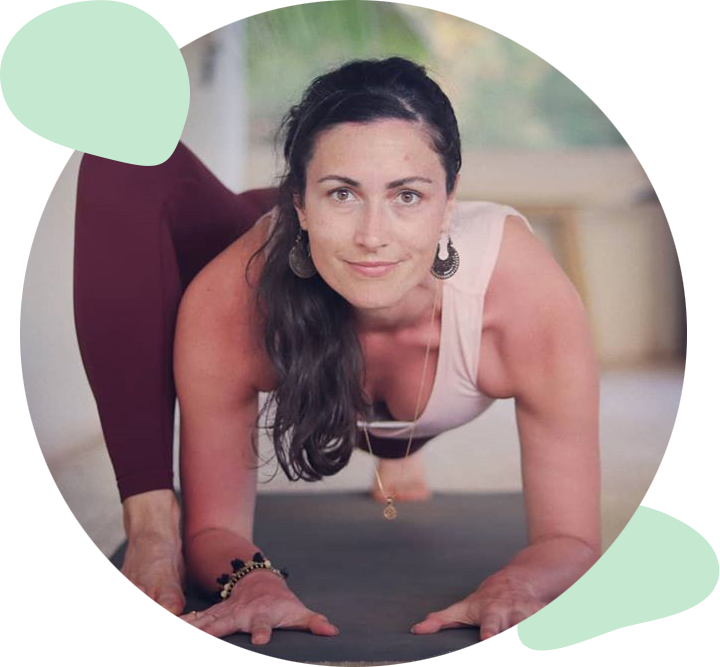 Meditating can be fascinating for those who don’t practice; one might think that nothing is happening at first glance. However practitioners can’t stop praising how impactful and beneficial it is. Before I started doing yoga I was having a hard time ge...

With everything that’s going on at the moment, I’m finding myself with a lot more free time. Many of the things I used to do to distract myself are no longer options, and I’m spending a lot more time with my own thoughts. This can be really diffic...